Happy New Year in the Spring?

It was sunny yesterday. We’ve had a couple of near 70 degree days then this. Gotta love springtime in the Midwest. What comes to mind is what God says to Moses in the beginning of the month of Nisan (in the OT known as Abib)

I find God’s statement interesting. This is prior to Passover and the deliverance from Egypt. God had promised deliverance but it hadn’t happened yet. Prior to this the first of the year was is in the month of Tishri on the Hebrew calendar. Tishri is in the Fall. The month in which God spoke this to Moses was Abib, what is now called Nisan. It is in the Spring.

That would be like celebrating Memorial Day in the Winter and New Year’s Eve around Easter. Only God knew what He was really about to do. He was marking the upcoming event with this declaration to Moses. Everything starts over from here. The Passover hadn’t happened yet but it was going to. God basically is saying, “Okay, we’re starting something new and it starts now. You are going to mark this date as beign as memorable to you the celebration of the New Year. Get ready because the new thing is beginning NOW!”

Photo by Rakicevic Nenad on Pexels.com 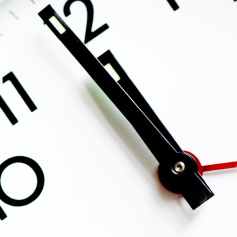 Photo by Peter Spencer on Pexels.com

How many times has the prophetic community heard these words? “Get ready! We’re crossing over!” I don’t know about you but if I’ve crossed over as many times as someone declared a crossing over I would have spent the last ten years crossing from one side of the Jordan to another. Don’t get me wrong. I am not speaking against the prophetic! Not in the slightest. All I’m saying is that sometimes a word pertains to you or you and your immediate community of people. Sometimes it applies to a larger scope of individuals. And on rare occasions it applies to a particular nation or the church at large, so to speak. Do we always heed what some so-called prophet says? If you are like me I want to hear from God directly on what pertains to me. Moses being, well, Moses he genuinely is God’s mouthpiece commissioned by God to speak to the nation of Israel and bring deliverance to God’s people. So when Moses says, “God said,..” you can pretty much take it to the bank that God actually said.

When God speaks a word to me my first reaction isn’t to apply this to the global body of Christ or even my close personal friends. My first instinct is to apply it to my personal life. When God spoke to Moses, saying, “this is for you,”  He continue by saying, “Tell the whole community of Israel…” So this new thing wasn’t just for Moses It was bigger than that. He wasn’t even relegating it to Moses and his household, or even Moses and the tribe of Levi. It was for the entire Hebrew nation.

God was preparing the nation for the next step. That step was going to include leaving Egypt and its powerful earthly dominion and spiritual oppression forever. But they had to get through the final plague first. So this new thing began with a visitation from death. At the stroke of midnight on the 14th of the month the death angel passed through the land of Egypt just as God said. But it took great faith for the entire community to do what Moses was telling them to do to prepare.

People who have lived their entire lives under such massive spiritual oppression can hardly trust that God is going to do anything on their behalf. Spiritual oppression will do that to you. Not only was it beyond their experience; it was beyond their spiritual ability. Spiritual structures governed by demonic strongholds aren’t easy to come out from under. It takes a mighty powerful act of God. This wasn’t a scene from Les Misérables. This wasn’t some guy summoning up  his human strength and skill to outsmart the evil overlords. This also wasn’t just the greatest national super power on earth at the time. Egypt was regionally a considerably strong spiritual force governed by multiple spiritual entities.

Even without the spiritual factor this would be like convincing the greater population of city of Chicago to secede from the Union. And I’m not talking about the rich who live in the nice neighborhoods and ritzy downtown high rises. I’m talking about the poor of the poor. These are the impoverished, the welfare dependent outcasts. Oh yeah, then they would have to walk through Wisconsin and part of the Upper Peninsula of Michigan to Thunder Bay, Ontario, Canada. Oh yeah and crossing through Lake Superior on the way. Couple this with the Black Plague sweeping through the region and it’s due to get to your door by tonight. But God says, “It’s all good. All you have to do to keep the Black Plague away is cook a lamb, make crackers, have dinner and wait it out.” Yeah, like you’re not going to get a bit of flack from anybody on this one.

But with God the far fetched is what He does best. Somehow, some way it all came together. The people cooperated. The death angel came. The Passover was accomplished and the people not only packed their stuff and left but as they were leaving the rich people who stayed behind gave them jewelry, gold and expensive clothes.

Exodus 12:35-36 Furthermore, the Israelites acted on Moses’ word and asked the Egyptians for articles of silver and gold, and for clothing. And the LORD gave the people such favor in the sight of the Egyptians that they granted their request. In this way they plundered the Egyptians.

God was announcing before it happened that a whole new world awaited the Hebrew people. All they had to do was obey the instructions of the Lord. Two weeks before the great escape God says, from this day forward it’s going to be Happy New Year to you. You will mark this time as everything beginning NOW.

It was like a dream come true when you freed us from our bondage and brought us back to Zion!

This was more than a new beginning. It was the beginning of an entirely new life, a life unlike any life they had ever known before. This was worth celebrating.

With Egypt behind them, Pharaoh, the ruling principality, along with his army all dead under the sea this people group could now go forward into this whole new life. The didn’t have to be concerned with their oppressors coming to look for them. All they had in front of them was what God had planned for them all along. What God planned for them was greater than anything they ever could have imagined. They could dream again. They could live again. They were free.

Photo by Peter Spencer on Pexels.com

May the grace of the Lord Jesus Christ, the love of God, and the fellowship of the Holy Spirit be with you all.  2 Cor. 13:14

The concept behind Beyond the Dalet, (Hebrew word for door), is based on Jesus Christ being the door of the sheepfold. (John 10:1-17) We go in and out through Christ and find pasture.

In John 7 it is recorded that: Jesus stood and said in a loud voice, “Let anyone who is thirsty come to me and drink. Whoever believes in me, as Scripture has said, rivers of living water will flow from within them.”

It is my desire that Beyond the Dalet be a fountain of refreshment for thirsty souls.

Recent Prophetic Words: Thru the Dalet - A Prophetic Journey

This morning just before I opened my eyes, as I awoke from a dream I heard two words shmuel ragant. I thought it might be a name and didn’t think much of it until later as the thought nagged me throughout the day. So I decided to look at this deeper. It didn’t occur to […]

Blow the Man Down

There has been a gale force storm surging over my people and many have been washed overboard in the process.

Shifts and Changes before Rosh Hashanah Take a peek at Live Beyond the Shadow:

The Church Under Construction

Now you can see all our current posts in one place. Click here Live Beyond the Shadow, Thru the Dalet and Beyond the Dalet posts on my Facebook page.

Users of this site be aware that Beyond the Dalet is an extension of the values and beliefs of its owner and director, Betty Hall. It is Christ-centered, Spirit-filled and Charismatic in orientation. We ask our readers to act respectfully towards others in their use of information accessed through this site.

By accessing Beyond the Dalet, you agree to hold the site, its assignees, licensees, owners, volunteers, officers and directors harmless from any loss, claim or damage arising from the use of any and all information and ideas contained on the site and in any correspondence.