Looking at the Years Through the Hebrew Letters

While the feasts are a part of the annual cycle they are not the entirety of the calendar. as wonderful as they are, there is so much more than the Feasts. I appreciate the richness and nuances of the feasts. I see the beauty of Christ in each and every celebration. Acknowledging the feasts has added a colorful and prophetic dimension to my life in Christ. So has studying the scriptures in their original language.

The Hebrew letters add a layer of insight to my devotional life, giving me understanding not gained through the English. Unlike the English alphabet the Hebrew is filled with unique attributes and incredible symbolism. Through applying these attributes to the study of God’s word we can gain access to what the mystics refer to as SOD (pronounced with a long ō). Sod is the spiritual realm of God. Some might call it a the kingdom of God, the prophetic, mystical or revelatory dimension. Some refer to SOD as entering the Garden of Eden. Hebrew has expanded my scope of understanding the scriptures. As a result of the incredible insight gained through this study I began to look at the significance of the Hebrew letters as seen in the calendar.

Below is an example of how today’s date is written in Hebrew. Hebrew reads from right to left.

A bit of explanation 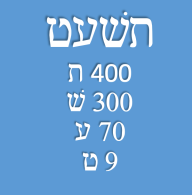 When looking at the prophetic picture represented by the Hebrew letters we typically look at the last two letters. The tav and shin together add up to 700. 79 is ayin 70 and tet 9. (as seen above) The ayin-70 represents the decade from 5770 through 5779. That means in the fall when the Hebrew year changes we will begin a new decade changing from ayin 70 to peh 80. (see below)

The Hebrew word pronounced peh is the Hebrew word for mouth. It comes from root word meaning to breathe or blow. The Peh is an open mouth. The letter peh will be the overarching theme of the upcoming decade just as ayin has been for this current decade.

Ayin is the Hebrew word for eyes. The thread running throughout this past decade has had to do with not only what we see but also, how we see; our perceptions and spiritual insight. It has been a decade of developing spiritual eyes.

Scripture verses which have been key for the ayin season have been:

Ephesians 1:18 I pray that the eyes of your heart may be enlightened, so that you will know what is the hope of His calling, what are the riches of the glory of His inheritance in the saints,

Hebrews 11:1 Now faith is the assurance of things hoped for, the conviction of things not seen.

Each year within the decade has a unique focus reflected by the number for that year 0-9. 5779 the letter is tet as it is the Hebrew number for nine. The tet represents God’s goodness.

Psalm 27:13 I remain confident of this: I will see the goodness of the LORD in the land of the living.

The ayin not only represents physical sight and our perception of things but actually seeing spiritually. It is seeing with the eyes of the spirit. Just like learning the steps to a new dance, developing our spiritual eyesight takes practice.

Hebrews 5:13-14 For everyone who partakes only of milk is not accustomed to the word of righteousness, for he is an infant. But solid food is for the mature, who because of practice have their senses trained to discern good and evil.

The ayin decade ends on Tishri 1, 5780 which is September 30, 2019. Each decade builds upon the previous. We grow and mature in Christ with each passing day. Just as a child is blissfully oblivious of his growth he simply enjoys each day as it comes. God designed us to enjoy Him and His creation.

1 Peter 2:2  Like newborn babies, you must crave pure spiritual milk so that you will grow into a full experience of salvation. Cry out for this nourishment.   NLT

More posts on the upcoming peh decade in the weeks and months ahead.